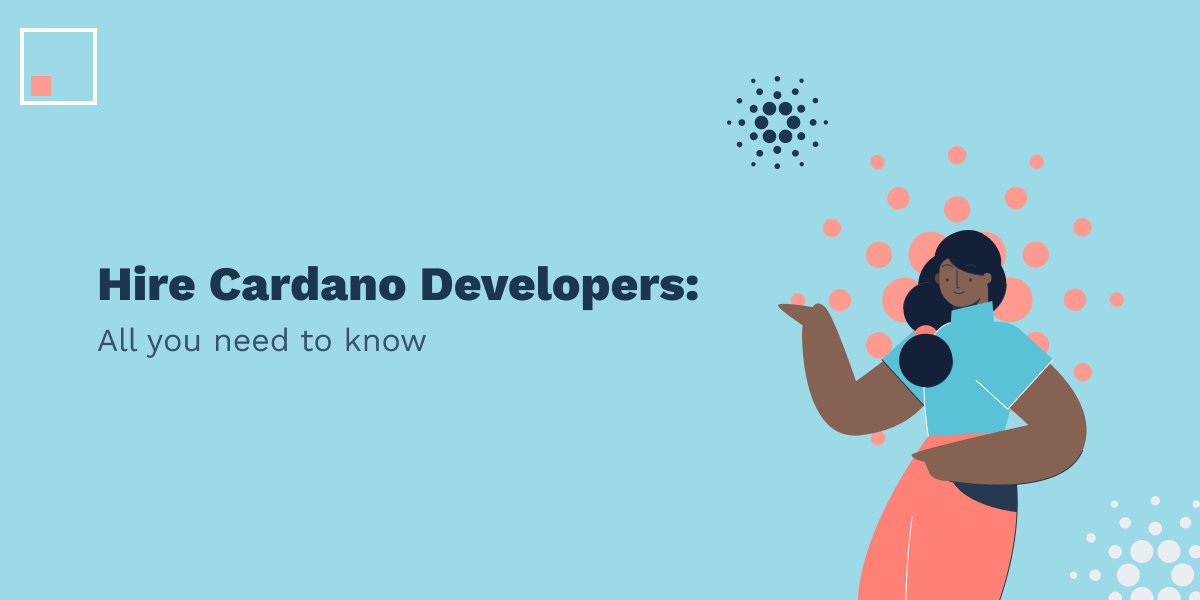 Hire Cardano Developers: All You Need to Know

Hiring
August 24, 2022
•
LUAN CAMPOS
Reading Time
•
Are you struggling to hire Cardano developers who meet your needs? Here's what you need to know about the hiring process.

With the increasing popularity of decentralized finance, many jobs have opened up in the blockchain space. Meanwhile, the demand for blockchain developers, specifically Cardano developers, has increased dramatically.

If you are looking to hire a Cardano developer for your organization, it is essential to first understand the project's development process and the various skill sets required to become a successful Cardano developer. You should also know how to interview and vet developers.

What Are Cardano and ADA?

Cardano is a decentralized public blockchain and cryptocurrency project. It is an open-source project with no central authority. The native currency of the Cardano network is called ADA.

Cardano is often hailed as the third generation of cryptocurrency, after Bitcoin and Ethereum. It was founded in 2015 by Charles Hoskinson, who is also one of the co-founders of Ethereum.

The Cardano network aims to solve some of the significant problems facing Bitcoin and Ethereum, such as scalability, sustainability, and interoperability. While these are the basics, it's imperative to learn more about Cardano development before using the blockchain for smart contracts.

More About Cardano Development: How Does the Blockchain Work?

Cardano has multiple chains running in parallel. The primary chain is called the Cardano Settlement Layer (CSL) and is used for transactions and value transfers. The CSL is similar to Bitcoin in this regard.

The CSL is based on the PoS consensus protocol called Ouroboros, which allows users to stake their ADA to validate transactions and earn rewards.

The Cardano Computation Layer is the second layer of the Cardano blockchain and is responsible for running smart contracts. The layer is Turing complete, meaning that it can run any program.

Why Use Cardano for Blockchain Development?

Cardano has been designed to be a more general-purpose blockchain platform than Ethereum, focusing on scalability and improved security features. In addition, the blockchain is being developed in a scientific manner by InputOutput Global (IOG), with its development process informed by peer-reviewed research publications written by IOG scientists and engineers.

The vision for Cardano is to create a blockchain platform that is capable of handling more complex applications than any protocol previously developed and that meets the needs of a global user base with a wide range of varying requirements.

Since it's a multilayer blockchain, Cardano gives the network flexibility regarding future upgrades. For example, the CSL will allow fiat currency to be transferred on the blockchain, while the CCL will be used for voting and stakeholder management.

The Cardano team is constantly working on developing new features and improving the platform. Here are some benefits of using Cardano for blockchain development.

Unlike many other blockchains merely supported by a white paper, Cardano is based on peer-reviewed research. The development team publishes their research papers in well-respected journals such as Nature Climate Change, IEEE Security & Privacy, and the Internet Protocol Journal.

This ensures that the Cardano platform is constantly being improved upon and that new features are rigorously tested before being implemented. Furthermore, computer scientists from all over the world have verified Cardano's features, supporting its role as the Internet of blockchains.

Cardano has a unique architecture that allows the network to be easily upgraded. For example, if a new consensus algorithm is needed, it can be implemented on the Settlement Layer without affecting the Computation Layer. In addition, users can continue to use the platform while upgrades are being made.

The modular approach also makes it easier for developers to create innovative applications on Cardano. They can pick and choose which features they need without using the entire platform.

Cardano uses the Proof-of-Stake consensus algorithm called Ouroboros, which is more secure than the Proof-of-Work algorithm used by Bitcoin. With Ouroboros, users can stake their ADA coins to help secure the network and earn rewards.

Since Ouroboros doesn't require mining, it's more energy-efficient than Proof-of-Work. It also means that there's no risk of a 51% attack, which is when a group of miners control more than half of a network's hash power and can double-spend coins or prevent other transactions from being confirmed.

Cardano uses a data structure called a Recursive Internetwork Architecture (RINA) to improve scalability. RINA allows for an unlimited number of users to interact with the network without each user needing their own copy of the blockchain.

It also uses a technique called "Sharding" to improve scalability. Sharding is a process of dividing the network into smaller pieces, which allows each piece to be processed independently. Thus, the Cardano network can theoretically scale infinitely and be able to handle billions of transactions per second.

Cardano is robust enough to handle significant changes, such as a "hard fork." A hard fork is when a cryptocurrency splits into two separate coins, usually due to disagreements among the developers or community.

For example, when Ethereum forked into Ethereum and Ethereum Classic, both coins functioned independently. Cardano is designed to allow for a similar event to occur without disrupting the entire network.

The Ouroboros PoS consensus mechanism is different from the mechanisms used by Ethereum and Bitcoin because it is less energy-intensive. When you hire Cardano developers, they need to understand how Ouroboros works.

Developers should also be familiar with the Cardano wallet Daedalus. Daedalus is a cryptocurrency wallet that supports ADA, the native token of Cardano. The wallet is available for Windows, macOS, and Linux.

Programming is among the most essential Cardano developer skills since developers will be writing code for smart contracts. Therefore, they should be familiar with at least one programming language. The two most popular languages for Cardano development are Haskell and Plutus.

Haskell is a statically typed, purely functional programming language with type inference and lazy evaluation. On the other hand, Plutus is a smart contract language based on Haskell.

Other essential skills for Cardano developers include an understanding of formal verification and security-focused programming.

Formal verification is a mathematically rigorous method of ensuring that a system meets its specifications. It is used to verify the correctness of software and hardware systems.

Meanwhile, security-focused programming is a type of programming that takes security concerns into account from the start. It involves writing code that is secure by design.

A Cardano developer should also have experience using Truffle, a popular development environment for Ethereum. Truffle allows for automated testing, debugging, and deployment of smart contracts.

It also comes with an interactive console that makes it easy to develop Solidity smart contracts.

An integrated development environment (IDE) is a software application that provides comprehensive facilities to computer programmers for software development.

For instance, the Eclipse IDE is a popular choice for developing smart contracts on Ethereum. This is because it has excellent support for Solidity and allows for the creation, compiling, testing, and deploying of smart contracts.

The Atom IDE is also a good choice for developing Solidity smart contracts. It has syntax highlighting and code completion for Solidity.

Learn More: Ethereum developer: All you need to know

The command-line interface (CLI) is a text-based interface used to view, run, and debug smart contracts. The CLI is a vital tool for a Cardano developer because it allows for executing commands on a blockchain. It also allows for the creation of new accounts, the sending of transactions, and the viewing of account balances.

Although Plutus is the primary Cardano programming language, other languages are also needed during the programming process. Besides Plutus and Haskell, Cardano developers should be proficient in higher-level languages, like JavaScript and Java.

Moreover, developers can use two other programming languages for Cardano development. These are:

How to Find and Hire Cardano (ADA) Developers

You can post job posts on these boards to find a Cardano developer with your desired skills. We discuss the must-haves of an effective job post in the section below.

LinkedIn is known as the world's largest professional network. As such, it's a great place to find Cardano developers.

There are two ways to find Cardano developers on LinkedIn. The first is to use LinkedIn's search function. The second is to join relevant LinkedIn groups and look through the members.

If you want to find the best Cardano developers, GitHub is the place to look. GitHub is a code-sharing platform where developers can share their code with the world.

You can use the search function or look through relevant repositories to find an experienced Cardano developer. Some popular Cardano repositories include cardano-wallet, cardano-sl, and cardano-node.

Revelo is a leading talent marketplace that connects employers with remote blockchain developers in Latin America. Since the platform only lists pre-vetted developers, you can eliminate the vetting step from your recruitment process.

You merely need to convert your requirements to Revelo, and the platform will find the perfect talent for your needs. Even better, you can manage remote developers through the platform as well.

How to Hire Cardano Developers

While you can customize this strategy based on your organization's individual needs, the standard steps remain the same for most businesses.

First, you must have a clear hiring strategy in place. You need to identify your company's needs and the skills required to meet those needs. Once you have done this, you can look for developers who possess the necessary skills. Here are some things to consider:

Once you have planned your hiring strategy, the next step is to write an effective job description. This is important because it will let qualified candidates know you have what they're looking for. When writing the job description, make sure to include the following:

Step 3: Use the Right Platforms

One of the best ways to find candidates is by using job boards. When choosing a job board, you should consider the following:

Alternatively, you can use a talent marketplace to take the hassle out of hiring Cardano developers. In this case, you don't have to write job ads or vet developers.

Once you start receiving applications, the next step is to screen candidates. There are a few things you should consider when screening candidates:

Here are some questions you can ask during a recruitment interview:

You can also give them a test project to see how well they work under pressure.

How Much Should You Pay Cardano Developers?

The average salary of a blockchain developer is $146,250 per year. If you're hiring on an hourly basis, this equates to $75 per hour.

While entry-level developers may earn around $121,917 a year, experienced developers can make about $180,000. You should set the compensation based on the developers' experience and the complexity of your project.

Since blockchain developers are in demand, you should expect to pay a higher salary than you would for other developers.

Cardano is a powerful platform for blockchain development that offers a wide range of benefits. It's based on peer-reviewed research, has a flexible architecture, and is more secure and scalable than other blockchains.

When it comes to hiring Cardano developers, the most important thing is to find developers who are a good fit for your company. To do this, you should take the time to write a detailed job description, use the right platforms to post your job, and screen candidates carefully.

By following these steps, you can find the best Cardano developers for your team. But if you want a swift and effective method to find Cardano developers without expending your time and resources, a talent marketplace, such as Revelo, is the way to go.

How to Hire the Best Discord Bot Developer?

What to Look For When You Hire IoT Developers