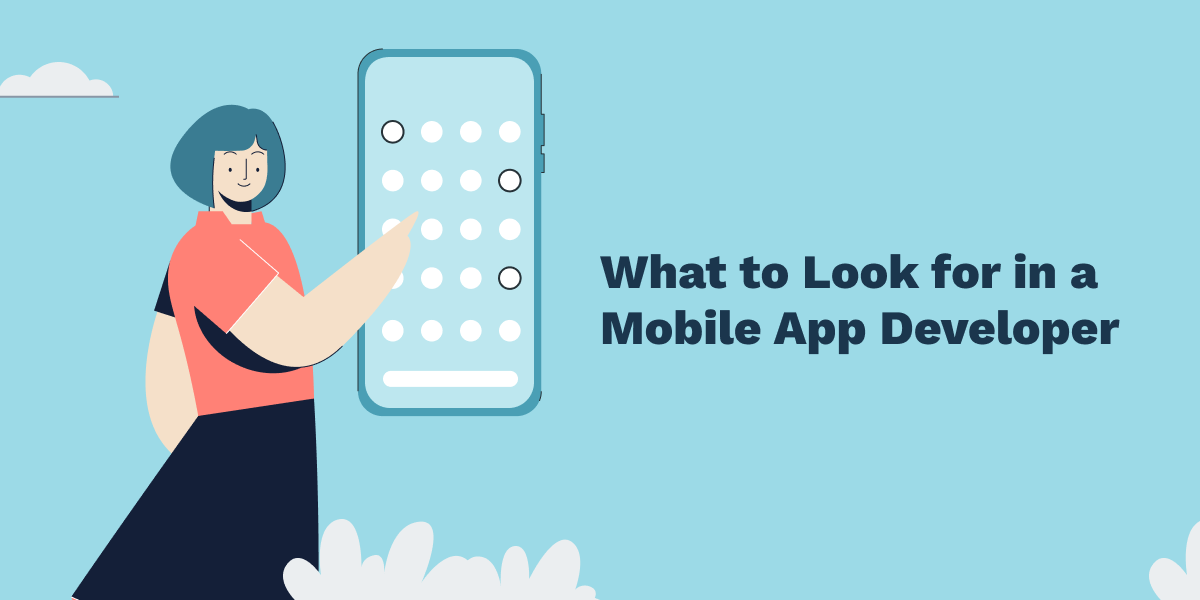 What to Look for in a Mobile App Developer

Hiring
September 26, 2022
•
Luan Campos
Reading Time
•
Adding a dedicated mobile app developer to your team can streamline the process of mobile application development. Uncover what to look for here.

However, finding mobile application developers is easier said than done. With so many app developers on sites like Fiverr and LinkedIn, it's easy to feel overwhelmed. Sifting top-notch talent from the rest can also be exhausting and time-consuming.

Luckily, there's a quick and easy way to find the best pick for your team — by hiring dedicated mobile app devs through talent marketplaces.

The Primary Function of a Mobile App Developer

As their name suggests, mobile app developers use coding languages to create and test apps for mobile phones and other mobile devices. They work with UI/UX designers, data scientists, marketing, quality assurance (QA), and other departments to create and deploy applications.

Depending on their area of expertise, mobile developers can write apps for Android, iOS, or both.

Note that "mobile app developer" is a broad term. The term includes distinct specializations such as:

What Skills Does Your Developer Need for Mobile App Development?

First, your ideal mobile app developer should have well-honed technical or hard skills, including:

Like all developers, mobile app developers must have robust programming skills.

However, if you're hiring for Android development, you need to look for a different set of languages. At a minimum, your hire should know at least two of the following:

Hybrid and cross-platform developers should know at least three of the above languages.

Cross-platform developers should also be familiar with certain frameworks. These frameworks allow developers to run their codebase on different platforms.

The best cross-platform developer for your team should know at least two of the following:

The best mobile app developer for your team should have ample experience working with relevant operating systems.

Your ideal hire should also know how to collaborate with UI/UX designers to create excellent user interfaces and experiences that address business objectives and customer needs.

Specifically, your hire should know how to implement your UI/UX designers' wireframes and Photoshop templates. They should also know how to test your app's UI and UX to ensure that it's:

Here's a list of tests that your dev should incorporate into the app development lifecycle:

Last but not least, your hire should have robust coding skills. Besides knowing two to three of the languages listed above, they should know how to code effectively and efficiently. They should also know how to:

Besides solid technical skills, the ideal hire should also have impressive soft skills like project management and communication skills. Without these skills, your dev will have a hard time integrating with the rest of your team, making it difficult to create, test, and deploy apps effectively and efficiently.

Your dev should also be familiar with at least one of the following project management methodologies:

Like other developers, mobile app devs don't work in a vacuum. As such, your hire should have effective communication skills. They should know:

Many companies hire mobile developers through LinkedIn and other job sites. However, this can be a frustrating and expensive process, since you need to manually sift through resumes, vet candidates yourself, and much more.

Access to an Expert During the Entire Testing Process

The right dedicated mobile dev doesn't just create and deploy apps — they will also work with your QA team to test apps throughout the app development lifecycle. Additional responsibilities include:

Talent marketplaces also vet dedicated devs for their programming skills. As such, dedicated mobile devs are experts in the programming language(s) needed for the app development process. Say goodbye to testing potential hires for their coding skills and experience.

Hire a Developer for Your Mobile Application Development Process

If you need an all-in-one dedicated solution for your project or company, consider partnering with Revelo. We'll help you source, hire, and manage mobile devs all on one platform.

To get started, just tell us about your project. We'll send you a list of the best picks in three days. After picking the candidates you want, you can immediately start building apps with a free 14-day trial.

Contact us today to learn how to hire a mobile app developer.

How to Find Developers for Your Startup